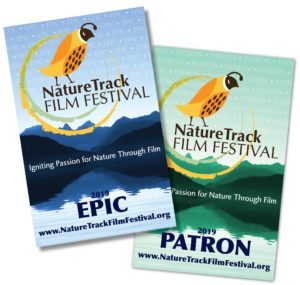 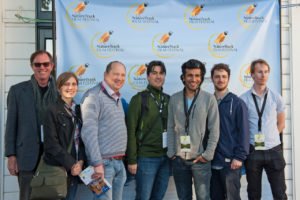 “Igniting Passion for Nature Through Film”

The NatureTrack Film Festival (NTFF) is discounting its Epic and Patron Passes for the remainder of November for those who wish to take advantage of extra early bird pricing for this exciting new nature focused film festival that is returning to Los Olivos, March 22 – 24, 2019, for its second year. Passes may be purchased atwww.naturetrackfilmfestival.org.

The NTFF Patron Pass, normally $200 is $160 through December 1st and includes:

Located just inland and north of Santa Barbara in the beautiful Santa Ynez Valley, gateway to the Los Padres National Forest, Los Olivos is home to the NatureTrack Film Festival, the only nature focused film festival between San Francisco and Los Angeles. Santa Barbara County is the birthplace of Earth Day, and the modern environmental movement, so it is somewhat of a surprise that up until this year the area had never produced a film festival exclusively focused on nature, outdoor adventure and environmental stewardship, until the NatureTrack Film Festival debuted in March 2018.

The first NatureTrack Film Festival was enthusiastically embraced by locals, filmmakers and visitors alike. The inaugural event attracted over 1,500 film submissions from around the world and ultimately presented 59 outstanding examples of nature cinema featuring notable outdoor filmmakers like Chris and Keith Malloy, Jeff Johnson, and Chris Burkard. Other filmmakers traveled from as far away as Germany, England and Pakistan to attend the debut NTFF, and their feedback has been invaluable in shaping the 2019 program which is set for March 22 – 24, 2019.

NatureTrack Film Festival organizers are keen to capitalize on their inaugural success by bringing an even more diverse and distinctive selection of outdoor film to the second NatureTrack Film Festival. Entries are thoughtfully curated and selected to “ignite passion for nature through film.” Since launching last March, the NTFF has already attracted attention in the outdoor film community. Festival producers were delighted and honored when renowned filmmaker, and National Geographic photographer, James Balog of “Chasing Ice” and more, asked to bring his newest film “The Human Element” to the 2019 NTFF.

The concept of a film festival dedicated to the outdoors, and situated in a stunning natural setting, originated with NTFF founder and director Sue Eisaguirre who conceived the idea for a local nature film festival as an extension of the non-profit NatureTrack Foundation that she started in 2011. NatureTrack introduces school children to outdoor spaces from the seashore to the inland oak woodlands of Santa Barbara County by providing cost-free outdoor field trips. Utilizing local trails and beaches throughout the county, NatureTrack instills students with leadership skills, attitudes and habits for lifelong learning, inspiring them to be respectful stewards of the natural world. Since 2011, over 18,000 students have had the opportunity to experience a NatureTrack field trip. Demand for the curriculum coordinated program has increased every year with teachers praising the docent-led excursions that align with classroom instruction. Sue was inspired to bring her outdoor vision indoors and onscreen for more people to enjoy and appreciate what her docents and students practice and experience in their outdoor “classrooms.”

The NatureTrack Film Festival (www.naturetrackfilmfestival.org) accepts long and short film submissions in both live and animated form in the categories of Adventure, Animation, Biography, Conservation, Kids Connecting With Nature, Scenic, Student, Music Video (short only) and a special category called Outdoors & Out of Bounds. The NTFF open submission period recently closed, and organizers are once again busy reviewing the many films they received from around the world

Accepted entries will be judged by a jury of film industry professionals and nature experts. $1,000 cash prizes will be awarded for overall Best in Festival (feature and short). The “Dan Conaway Award” of $500 will be presented to the best depiction of Kids Connecting with Nature, and there will also be a $500 cash award for the Audience Favorite winner. All category winners will receive a custom award designed by Kristen Cramer of Global Eye Art Collective www.geartco.com.

The NatureTrack Film Festival welcomes sponsor and advertiser inquiries and offers numerous participation levels for businesses and individuals who wish to support the NTFF as a sponsor, partner or advertiser. Please contact Sue Eisaguirre sue@NatureTrackFilmFestival.org for information on sponsor and advertising opportunities.

Please visit the NatureTrackFilm Festival on social media at:

Discounted passes for the 2019 NatureTrack Film Festival may be purchased at www.naturetrackfilmfestival.org through December 1st. Regular pricing thereafter.

NatureTrack is at Fest Forum 2018!