The NatureTrack Film Festival is thrilled and proud to announce the last-minute addition of the US premiere of the new Netflix original series Our Planet, with bonus footage that will only be shown at the NatureTrack Film Festival. The premiere of Our Planet joins an already exciting mix of 61 other outstanding films from around the world. Our Planet is set to debut on Netflix April 5th, but audiences at the NatureTrack Film Festival will have the exclusive chance to view Part 1 of the series with the bonus footage before it airs. The 8-part series, from the creators of the BAFTA-winning series Planet Earth, explores the unique and precious wonders of our natural world. Like the enormously popular BBC produced Planet Earth and Blue Planet series, Our Planet is also narrated by the great David Attenborough and features exhilarating visuals and stunning footage of rarely-seen animals mixed with somber truths about humanity’s impact on the planet’s habitats and species. Produced by Alastair Fothergill and Keith Scholey in partnership with the World Wildlife Fund, and with over 600 members of the crew capturing footage over more than 3,500 filming days, Our Planet reveals never-before-seen habitats from more than 50 countries. The premiere of Our Planet, with special bonus footage only for NTFF’s audience, will screen at 10:00 AM Sunday, March 24th, in Stacy Hall at St. Mark’s-in-the-Valley Church in Los Olivos. 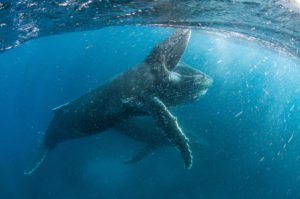 “Our Planet will take viewers on a spectacular journey of discovery showcasing the beauty and fragility of our natural world. Today we have become the greatest threat to the health of our home but there’s still time for us to address the challenges we’ve created, if we act now. We need the world to pay attention. Our Planet brings together some of the world’s best filmmakers and conservationists and I’m delighted to help bring this important story to millions of people worldwide.“

The partnership with WWF enables the series to be part of a wider global project which will help inspire people around the world to discover why our natural world matters. From a wealth of online resources to educational programmes for schools, the project will go beyond just showcasing the wonders of our planet to reveal what we must do now to ensure people and nature can thrive.

Alastair Fothergill, Director at Silverback, said: ‘Our Planet is our most ambitious endeavour to date, we hope it will inspire and delight hundreds of millions of people across the world so they can understand our planet, and the environmental threat it faces, as never before. The crew have ventured to all corners of the globe to capture breathtaking natural history sequences and using the latest filming technology to bring these never-filmed-before moments into people’s homes. By launching on Netflix at the same time all over the world, this series will enable people to connect to and understand the shared responsibility we all have. We are genuinely all in this together.”

61 OTHER FILMS FROM AROUND THE WORLD

Other not-to-be missed films at the NatureTrack Film Festival include Free Solo, winner of the Academy Award for Best Documentary Feature and a jaw-dropping look at the death-defying, rope-free ascent of El Capitan by famed climber Alex Honnold. The NTFF will also host the final California screening of Face of Winter, an homage to the late Warren Miller told by those who knew the trail-blazing quipster best. Festival film-goers should take special note of The Human Element, a powerful film examination of how the “human element” interacts with the other four elements: earth, water, fire and air. The film’s director Matthew Testa will be on hand for a Q&A after the film and will also participate on a film panel examining the role of filmmaking in land preservation. The adventurous and beautiful film, Into the Arctic: Awakening, will be the NTFF Spotlight Dinner topic with its director, artist and explorer Cory Trépanier, as guest speaker describing his numerous painting expeditions to the Canadian Arctic. And another exciting late addition to the NTFF, just released last month, is Into the Canyon, by director Pete McBride. NTFF audiences will be among the first to see this epic film documenting McBride’s hike through the length of the canyon with trekking partner Kevin Fedarko. These titles are just a fraction of the many brilliant films collected from 18 countries for the second outing of the first nature-focused film festival in Santa Barbara County, and the only one between San Francisco and Los Angeles.

The sheer number of nature focused films showing, is exceeded only by the astounding quality of the films that will screen at the NatureTrack Film Festival. Hundreds were submitted from around the world in the categories of Adventure, Animation, Biography, Conservation, Kids Connecting to Nature, Scenic, Student-made, and an extreme outdoor adventure category called, Outdoors and Out of Bounds. Movie-goers will definitely be treated to the very best of nature cinema, in multiple genres, from around the world. Films will screen at three venues: The Historic SYV Grange, St. Mark’s-in-the-Valley Church, and the Gates Foss Community Center at Los Olivos School. Each of the three movie sites will feature a commercial theater-quality projection, screen, and sound set-up for the 62 international films.

o   Priority entrance to all films and panels

o   And best of all, Epic Pass purchases support the nonprofit NatureTrack Foundation which sponsors cost-free, curriculum aligned, outdoor field trips for K-12 students all over Santa Barbara County. Over 18,000 students to date have taken a NatureTrack field trip.

NTFF Thanks All Their Partners and Supporters!