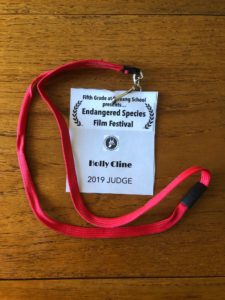 Recently, NatureTrack was pleased to take part in the judging process for Solvang School’s 1st Fifth Grade Film Festival! Expertly organized by Mrs. Romero, each of the 3 classrooms divided their students into groups, who then worked collaboratively on creating a short film (5 minutes or less in length) about an endangered species. NatureTrack provided 6 of the 12 volunteer judges, and also donated NTFF sweatshirts, shirts, and seat cushions as prizes to the winning filmmakers.

The student films were well thought out, and all of the judges were impressed by the quality. All of the judges said that it was very difficult to choose the top three winning groups in each classroom! NatureTrack Film Festival co-director Holly Cline was so encouraged by the efforts of the students, and said she hoped to one day see a screening of a student’s future film at the NatureTrack Film Festival if they continue with honing their craft.

The NatureTrack Film Festival includes a category for Student films in addition to, Conservation, Adventure, Outdoors & Out of Bounds, Scenic, Animation, and Kids Connecting with Nature. Feature films as well as Shorts (40 min or less) will be accepted.

All details will be provided on FilmFreeway.