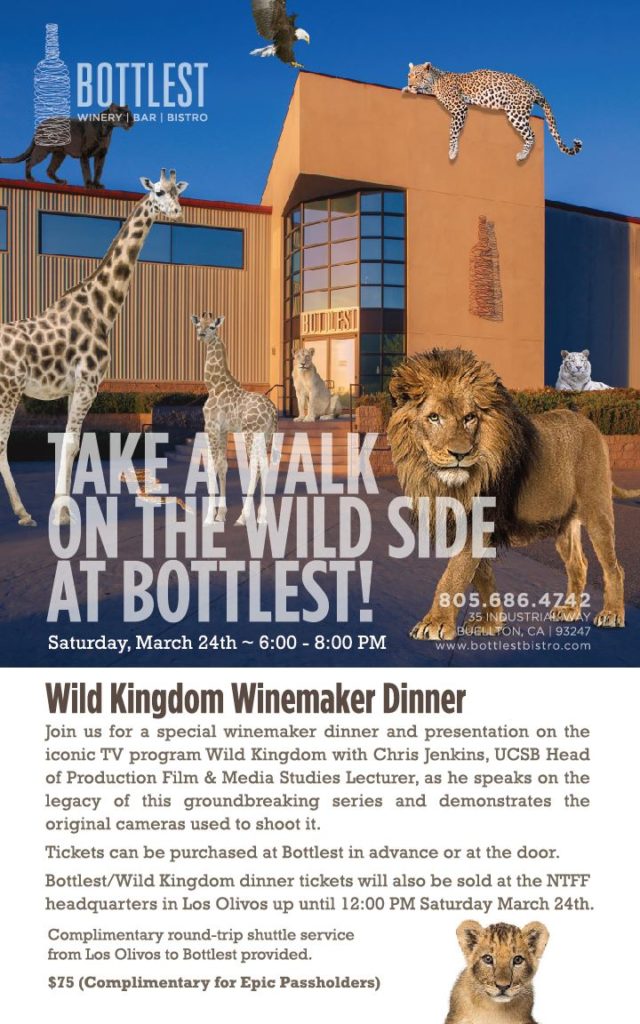 Saturday, March 24 • 6:00-8:00 PM
35 Industrial Way, Buellton
Complimentary transportation from Los Olivos to Bottlest
and back will be provided.

Included with Epic passes – must RSVP by March 12 to guarantee seating: holly@naturetrackfilmfestival.local

$75 – Regular Ticket
Purchase online or call: 805.686-4742
Tickets will also be sold at the NTFF headquarters in Los Olivos up until 12PM Saturday (while they last).

Enjoy a special presentation by Chris Jenkins, a filmmaker and Head of Production in the Film & Media Studies department at UCSB, as he discusses the legacy of the iconic Mutual of Omaha program, Wild Kingdom, including a demonstration of the original cameras and equipment used to shoot this groundbreaking TV show.

Chris met Warren Garst in Fort Collins, Colorado after giving a talk about his experiences working as a UN Volunteer in northern Kenya. The host of the event introduced them and when she said he was the cameraman behind Mutual of Omaha’s Wild Kingdom, Chris wanted to bow down, but instead started reciting the names of the gorillas Diane Fossey had befriended. Garst invited Chris to lunch with his wife Genny, and their wonderful friendship had begun. 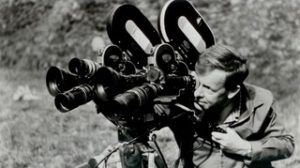 Warren was born on September 21, 1922 in Douglas, Wyoming, where he spent most of his childhood. He attended Cal Tech and later transferred to the University of Colorado at Boulder to study mechanical engineering. His college career was interrupted temporarily when he enlisted in the United States Navy. After four years of service, Warren returned to the University of Colorado and completed his degree in mechanical engineering. After a short time working on oil rigs, Warren returned home to Wyoming to free-lance write with his mother, Doris “Shannon” Garst. After working all summer on his writing, he traveled to Jackson Hole, Wyoming to the Wildlife Research Station in search for possible job opportunities photographing animals. This proved fruitful as he would find the connections that helped build his career, but he also met the love of his life, Genny Sherwin.

After their honeymoon, the couple moved to Fort Collins, Colorado because Genny was offered a job at Colorado State University (CSU) teaching computer science. While filming wildlife and editing the first program for Wild Kingdom, Warren also worked on his masters in zoology at CSU. By the time he graduated, he had become a full-time wildlife photographer for Mutual of Omaha’s Wild Kingdom. In 1963, Genny left her job at CSU to accompany Warren on a worldwide adventure filming wildlife. 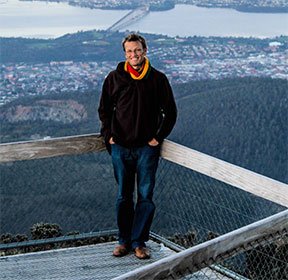 Chris Jenkins received his Master’s degree in Documentary Film & Video from Stanford University in 1999 and has worked as cinematographer for a variety of feature length documentaries including Sierra Leone’s Refugee All Stars, Riverwebs, and The Matador. His work has aired on PBS, A&E, Discovery, The History Channel, The Travel Channel and The Sundance Channel. Since moving to Santa Barbara, Chris has directed several films about local subjects including the Vera Cruz house of paintings, noteworthy organizations like African Women Rising (formerly CAFWA, narrated by Oprah Winfrey), documenting the Paris Agreement from the inside of the UNFCCC negotiations and most recently a short film called Lost Crops, about two friends on a worldwide search for sustainable superfoods.

Born in Wyoming to a large family that often lived abroad on sabbaticals, Chris quickly developed a keen interest in distant places, cultures and wildlife. His early studies were focused in the fine arts. After receiving his BFA in bronze sculpture and oil painting, he won an Ambassadorial Scholarship to live and study in southern Chile for a year. Rather than waiting a year to fly to his host country, Chris quit his job as a waiter and invited a friend to travel overland through 11 countries, with two bicycles, a tent, a video camera (provided by National Geographic), and not much more. They rode south from Wyoming the day before snow hit and arrived in Santiago the following year. This semi-successful adventure and Chris’s community work with orphaned children in the coastal village of Coronel led to an invitation to apply to a UNHCR program that would bring him to the Kakuma Refugee Camp in northern Kenya. There, he developed a sign language class for deaf South Sudanese refugees while documenting the music and dance of the Dinka and Nuer tribes.